Monsanto is perceived as bad for Bayer's image - but the exact opposite can be the case!

POWERMETRICS, the brand analysis and evaluation tool developed by the POWERGROUP, provides a glimpse behind the scenes of global brand communications and shows how brands are perceived. The POWERGROUP team develops strategies for brand positioning and supports companies in the implementation of a sustainable communication strategy.

Bayer's proposed take-over of Monsanto has thus far been unfavourably reviewed by the media. Monsanto, the producer of genetically engineered crop-seeds and pesticides, is widely held to be the world's most dangerous company. But, do wide-spread negative perceptions have a measurable impact on Monsanto's brand image among its customers? Could these negative perceptions have an impact on the Bayer brand?

We have assessed these questions using the POWERMETRICS brand analysis tool. The English language internet communications of the two brands are screened to find the most-often used descriptive adjectives, which are then positioned on a coordinate grid; the Brand Map. Those adjectives which are furthest to the left of the y-axis are deemed 'rational'. Most technological brands fall in this coordinate. Adjectives which are further down on the y-axis, the xenophobic area, reflect an aggressive perception among the public.

The top-line results of a POWERMETRICS analysis of the Bayer and Monsanto brands: 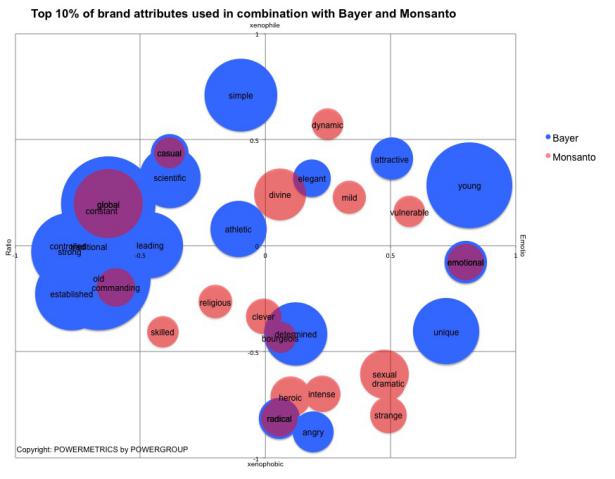 Bayer's descriptors include global, leading, established, which is the norm for large corporations. Bayer is positioned between the second and third quadrant of the Brand Map, and is therefore predominantly regarded as 'rational', with a relatively balanced image between reliable / honest (Q-II) and powerful / dominant (Q-III).

Monsanto is strikingly different: Here, a dominant perception of the brand in the emotionally negative quadrant Q-IV strikes the eye. Terms such as dramatic - strange - radical even make it into the top ten adjectives commonly used for Monsanto.

In a direct comparison of the brand perception, Bayer dominates with more than twice as many results as Monsanto. Even in the strongest quadrant of Monsanto (Q-IV), Bayer still has 50% more results of adjective-brand combinations. As expected, the results in Bayer's strongest quadrant (Q-II) are almost three times as many.

Monsanto's image is marked by negative public perception. However, this does not automatically imply that Monsanto and its products are also considered negative by its agricultural customers. In fact, the POWERGROUP's marketing experts report from a similar case from the mid-2000s, where consumer decision-making was found to be regularly in favour of a company despite its aggressive, dominant brand perception: the energy company E.ON. The company's alleged negative features such as aggressiveness, menacing and focusing on nuclear power did not result in consumers turning away from the big corporation and switching to alternative, often smaller, providers. Rather, the advantages of market power and guaranteed continuous power supply most often led to a decision in favour of E.ON.

Based on the preliminary POWERMETRICS results, it would be conceivable to maintain Monsanto as a strong brand within Bayer. This would require putting the positive impact of Monsanto's products - high yield seeds which also eliminate the need for pesticides which kill bees and butterflies - in a new light.

Given an appropriate brand strategy and tactical communication, Monsanto could even become a driving force for the Bayer brand. The strong, emotionally aggressive moment emanating from Monsanto could be used as a success factor - as was the case with E.ON - and thus the new 'brand of the Bayer group' could unexpectedly generate a significant, positive image gain for Bayer.

Do you want to discover your brand's potential?

POWERMETRICS enables you to analyze the effectiveness of your brand's positioning.